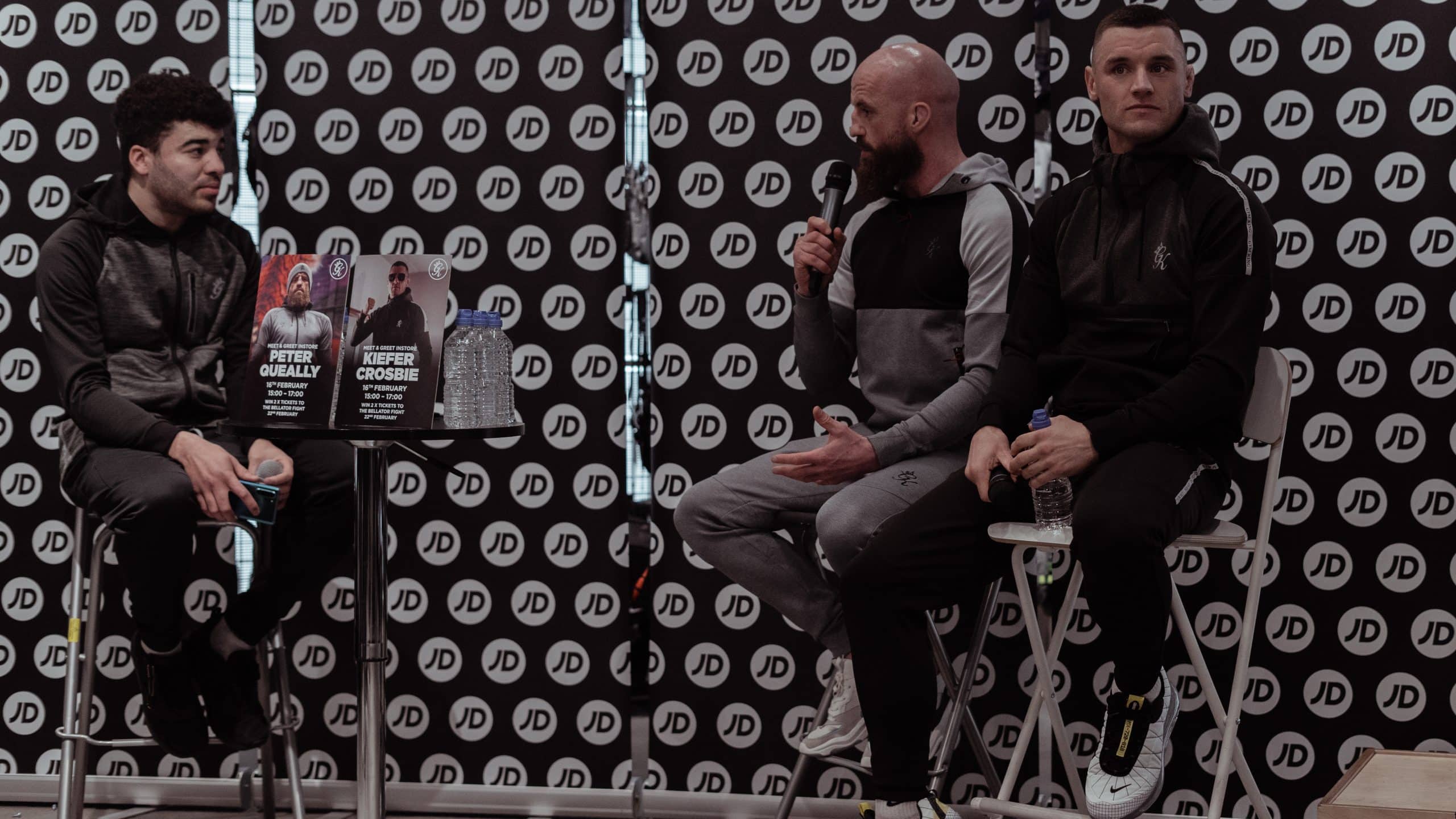 Ahead of Bellator Dublin this Saturday we sat down with Peter Queally and Kiefer Crosbie to chat about Irish MMA, their careers and the upcoming fights. We spoke to Peter and Kiefer at our in-store event last Sunday at our Dublin Jervis Centre Store in association with Gym King. You can shop the Gym King collection by clicking here. Photo credits, James Fagan.

6 years on now from McGregor vs Brandao at the 3 Arena, how much do you feel MMA has grown in Ireland since then?

Peter: “Its grown enormously, this year we’re going to have Bellator here twice and the UFC. I think if you had of told anyone six years ago you’d have 2 major promotions in one 12 month cycle, they would of found it unbelievable, that speaks volumes for how much it’s come on in my opinion. You don’t need me tell you it just shows you”

This is now Bellator’s 5th event in Dublin and it’s 3rd headlined by an Irish fighter, with Bellator continuing to sign up and coming Irish talent, do you see Bellator as a promotion becoming the premiere destination for young Irish MMA fighters.

Kiefer: It already is. It depends what your goals are, if you want to be famous you can jump on to a different organization, if you want to be rich you can jump to a different organization. Bellator are paying very well though and their looking after us very well. They’re giving us a great platform, giving us good fights and keeping us busy. I had four fights last year and I would have had five if they gave me another one. Four fights in one year is very good when being a professional fighter. This year I’m planning on having another four. I’m very happy at Bellator and I do think it’s the future of MMA to be honest.

Peter: “We’ll see this year the UFC and Bellator are going to have a show a month apart from each other and we’ll see which one is better, I know what my moneys on. Bellator have all the Irish names.”

Kiefer: “Don’t get me wrong the UFC is amazing and in fairness the likes of Conor has kicked down the door for us and without those events, these events wouldn’t be taking place and Bellator wouldn’t be where it is. MMA has grown as a whole and Bellator has done amazing things, I’m very happy with the company.”

You both train out of SBG Dublin under tutelage of John Kavanagh, how significant has it been for both of your careers to have a world class MMA Gym to train out of right on your door step as opposed to moving to America etc.

Peter: “We’re incredibly lucky to have that. The amount of guys we get sleeping in the dorms in our gym week to week doing what you just said and we have don’t have to because it’s ten minutes from our house. It’s like 5-10 new people every week, I don’t even get to know them anymore, I don’t even bother because I know they’ll be gone next week. I’m just thankful that’s not us, we’re not flying to Florida or somewhere every two months for a camp and then coming home again. We’re very lucky that it’s right on our doorstep.”

Kiefer: “100%. I‘ve been to other gyms around the world and to be honest you wouldn’t get harder training than in our gym. The level in our gym is ridiculous. I mean look at Conor for one, we’re talking about one of the greatest of all time and he literally lives in Crumlin and he didn’t have to go to America to do it. John, (Kavanagh) the knowledge that man has is something else. We even have Americans coming to stay at our gym now, so I don’t think travelling overseas is all it’s cracked up to be. The facilities we have now is ridiculous, if you’d been in it you’d understand.”

Peter: “What’s important with our gym is, I feel like we’re one of the few gyms who is still a team. He’s (Kiefer) still one of my best friends. We’ve known each other 10-11 years, There’s a bond there. We’re not just floating in and out, fighting for a month and then leaving. There’s a family vibe in our gym, that I don’t notice in other gyms.”

Kiefer: “Don’t get me wrong, you make the most it yourself. You’re don’t get to be a fighter with out training and putting the work in. You don’t need much, you just need a mat and good bodies. It’s the people, if you go to a different gym you’re gunning to be injured. If I jump on a mat anywhere in the world and they know who I am not one person is going to care about my body but If I spar him (Peter), we kill each other and come in the next day fresh.”

Peter: “I don’t think they’re trying to hurt you, they’re more trying to prove themselves. So there’s no regard for your safety in that proving process. Whereas no matter how much I want to get one over on him (Kiefer), I’m not going to take a chance with his body and I know he’d do the same for me. It’s very important when you’re training, you may only fight 3 times a year, it’s a big amount of money each time and you only get three times to make it. You have to stay healthy, so trust is big thing in training.”

It’s interesting to hear that because everytime you hear of fighters from smaller countries who get a loss on their record from the UFC or Bellator, the talk is always when are the moving to American Top Team or AKA (American Kickboxing Academy)

Peter: “People said this about Conor on his rise, when he first knocked people out “he needs to go to America.” They kept saying it, it was so stupid. He proved that wrong.”

Kiefer: “They’re warped into this mindset of if I move somewhere I’m going to get better. Don’t get me wrong you’d get great training anywhere in the world. Its home is where the heart is with your gym. I’ve come up in SBG so if I was to jump ship now, I don’t think I’d feel right.”

Unfortunately Peter you’ve had to pull out with injury of next Saturday’s card, how is recovery coming along and how do you mentally deal with a set back like that?

Recovery is coming along excellent, it feels much better than it even did a few weeks ago so I’m really happy with how it’s coming along. At the time when I pulled out of the fight, I didn’t want to pull out. Thankfully John convinced me to pull out because it still feels horrible still, I thought it would feel a lot better closer to the fight, so I definitely made the right decision. Mentally it’s always hard, especially when it’s here in Dublin and it’s front of your own people. I’m very lucky though, my next fight is already signed and it’s actually probably a bigger and better fight than this one was going to be. So that helps the mental process. My job on the night will be to go and support my team mates and enjoy the night, soak up the atmosphere and not have to stress about my fight.

When are you targeting for your return?

I can’t say when it’s going to be but it’s a big fight!

Last time out in your fight against Ryan Scope, you had the incredible entrance with the Irish fans almost blowing the roof off the place and you weathered a pretty serious storm to emerge victorious. Where does that rank in the accomplishments of your career so far?

It’s probably the one I enjoyed the most, there’s one other one, it was three fights ago before I signed for Bellator and it was for a big Russian promotion. I fought this hometown guy there and he was a big name in Russia. I knocked him out in four minutes, after the fight the crowd went so crazy because their man lost basically. They started throwing things into the ring, a military escort had to bring us out of the arena and bring us to our hotel. Then they had to change our hotel for safety! It was just a mad scene but that one felt good as well. That was a special moment but the Scope one was bigger because it was at home.

Kiefer, you’re 3-1 in your Bellator career so far with your only loss coming via an unfortunate DQ, how would you rate your time in the promotion so far?

I’m 4-0, show me footage of me losing! Show me footage of someone beating me! My time in the promotion so far has been amazing, I’m very very happy. We went from fighting for peanuts, to mental money on big cards for Bellator. I’m very lucky to be in this position, Bellator are changing the game as far as I’m concerned. They’ve treated me with so much respect, everyone behind the scenes is amazing, they don’t just treat you like another number, they put a lot of work into you and effort into you, anything I want they’ll do for you so I’m very happy.

Next weekend you take on Iamik Furtado, how does your preparation change based on your opponent or do you prefer focus on your game.

I never focus on my opponent, I’ve already had three different opponents for this fight. Originally I had two lads from America and now this lad. So there’s really no point. I could get a phone call tomorrow saying he (Furtado) failed a medical and now you’re fighting this guy. This has happened to me before, I’ve had five changes the week of the fight, that must be a record or something. I really don’t care, I’m just focussed on me and whoever shows up on Saturday night.

After this fight where does see yourself going? Your division is stacked with top contenders, rising stars and seasoned veterans, what sort of fight would you like in your next bout?

Right now I’m moving down a weight class, I’ve had all my fights at Welterweight and now I’m moving down to lightweight. I just think once I’m young and I can cut the weight safely and move down and climb the ladder there. In the next fight I wouldn’t mind fighting a few ex UFC veterans, some names that everybody knows. I might save that for after the fight’s over so I’ll keep that in the back pocket for now.

Prediction of how the fight is going to end?